We started off another great year of partnering with Benzonia Public Library with a day of photography workshops.

The University of Michigan School of Information photographer Jeffrey Smith was our professional mentor for the day. Jeff has visited Benzonia before as a photographer and videographer for Making in Michigan Libraries, but this was his first time giving a presentation. He did a marvelous job! In fact, Benzonia’s director Amanda McLaren tells us she just ran into someone from the weekend workshop who was still raving about it days later!

Jeff’s session was broken up into two parts. The first part was on Saturday morning from 10 to 12 where he explained tricks for taking high quality photos on a smart phone. Such tricks included holding your fingers down on the screen to lock focus, moving your finger up and down on the screen to adjust exposure, and using the volume buttons while in the camera app to take a picture. After he showed a few tricks for taking photos he then went on to demonstrate how to edit photos on your smartphone with an app called Snapseed and everyone got up and moved around to try it out!

A break was given for lunch and then patrons met up in downtown Beulah for the photowalk! The photowalk gave individuals with smartphones and more standard digital cameras a chance to practice their skills and learn about perspective, light, framing, etc. from a professional photographer. 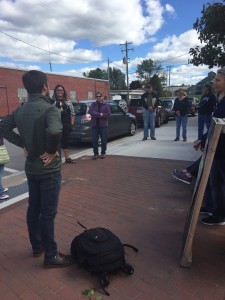 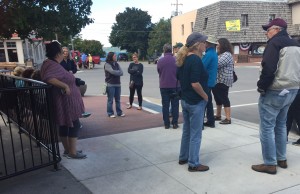 Jeff took patrons on a walk around town in unexpected places. Our first stop was near a dumpster behind a building. Jeff explained that although this would not typically be viewed as a great photo opportunity the bright blue color and texture of the wall led to stellar shots. It just required a matter of framing things so that the dumpster didn’t show. 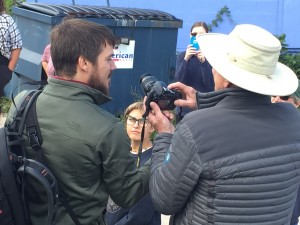 Our next locations were the top of a high hill that overlooked a few rooftops with a view of Crystal Lake in the background, shooting from behind weeds on a beach because layers help make a better image, and capturing action shots of seagulls. After the photowalk the group headed back to Benzonia Public Library for a tutorial on editing photos on a computer through Photoshop. The event ended with a showcase of the beautifully shot and edited photos taken on the walk! 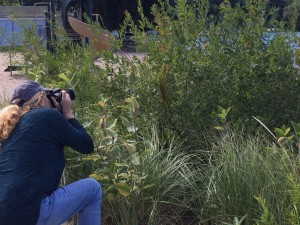 It was a wonderful way to spend a Saturday — trying to view the world in a new perspective. If you want to see more photos from the event feel free to check out our album on twitter here! 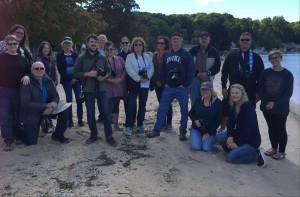 This not-awesome photo was not shot by Jeff!