We loaned some MML equipment we wouldn’t be using this summer to Kayla Carucci, a doctoral student at U-M School of Information. Check out what she’s doing with it! From the article on My Central Jersey:

You might think that a nursing home is the last place you will find an innovative workshop where people can create works of art, on their own schedule, using some pretty high-tech gadgets.

But think again, because that’s exactly what’s going on at Reformed Church Home in Old Bridge this summer.

The brainchild of Kayla Carucci, a Middletown resident and PhD student at the University of Michigan, “Creations with Kayla” has found great traction among RCH residents as they explore traditional crafting using some pretty cutting-edge technologies — ones that might even surprise some millennials.

And the best part is, they are creating mainly on their own, with little instruction from Carucci herself.

The concept is known in popular culture as a “makerspace,” but Carucci has added her own spin by applying the fundamentals of the maker movement in the senior, long-term care setting. Her goal is to determine if the well-being of long-term care residents can be improved by offering self-directed sessions using low- and high-tech tools to create whatever the participant chooses …

“I hope to empower residents to make the decision to come at their convenience and create to their hearts desire. It’s a chance to do something different and challenging. There’s no reason seniors can’t take advantage of spaces that are in place in libraries, schools, and commercial settings,” Carucci said.

Indeed, the makerspace model has been around since the early 2000s, fueled mostly by an interest in computer science and robotics. It has evolved to become a hands on learning environment for children, DIY-ers, crafters and entrepreneurs. Equipment used in some makerspaces include 3D printers, iPads, digital embroidery equipment and even sewing machines, all of which are in place at Reformed Church Home for the residents to explore …

“I could do this all day, I really enjoy it,” says Mary Puskar, an assisted-living resident at the Home. “I’m learning so many things, like candle making and how to paint on an iPad using a stylus. We even digitally embroidered my name on a sweater so I wouldn’t misplace it again.”

Nursing home resident Sabina McCarthy agreed. “I have arthritis and can’t write or do much with my hands, but I can design something on the 3D printer and watch it print,” she said. “I can finally do crafts again.”

Great job, Kayla! Be sure to click through to the original article to see the photos!

Last month and again yesterday, I was happy to be able to share some of our work with the Alabama and Buffalo cohorts of the REALISD project, which provides thoughtful STEM-focused professional development for school librarians in rural areas.

You can find the slide deck here. 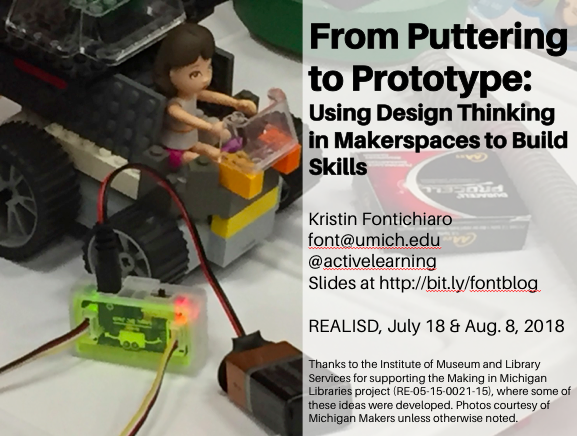